Aluminium alloy components used in building complies as follows. As defined by BS 476: Part 4 and the 1974 SOLAS Convention (as amended) aluminium alloys are ‘non-combustible’ and also provide Class 1 surface spread of flame to BS 476: Part 7.

In addition, BS 476: Part 3 covers external fire exposure roof tests and the classifications laid down in the standard range from AA to DD. The first letter refers to the fire penetration performance and the second letter to the surface spread of flame.

Aluminium and its alloys are rated AA, the highest possible under this classification system. Materials are also tested for fire propagation performance to BS 476: Part 6 (1989) and coating systems are taken into account. Aluminium achieves excellent ratings under this Standard.

British Standard 476 refers to fire tests on building materials and structures. The parts of this standard that are of most relevance to powder coatings are Parts 6 and 7.

The result of this test is a fire propagation index. It is a measure of the contribution to fire growth made by an essentially flat surface. The results of the test are specific to the test specimen i.e. the product on that particular substrate in the form in which it was tested. Therefore it cannot be used as a method for assessing the product in all situations.

This is a method of measuring flame spread along the surface of a specimen. Again the results of the test are specific to the test specimen i.e. the product on that particular substrate in the form in which it was tested.

Therefore it cannot be used as a method for assessing the product in all situations. As defined in the UK Building Regulations 2000 – Fire Safety Approved Document B, the highest product performance classification for wall or ceiling linings is Class 0.

Interpon D1000 series and D2000 Series have been tested to BS476 Parts 6 and 7 and have met the criteria for Class 0 building regulation approval.

AliDeck Slip Resistant Inserts are made from PVC Polymers, they are generally referred to as “Self-Extinguishing” which means that they will burn whilst a high enough heat source of flame is applied to them but once removed they stop burning. 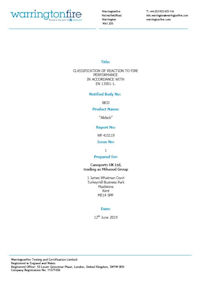 Once tested, products are categorised using regulated testing methods in Euroclasses A1 to F. The government requirements to allow legal use of building products on balconies in residential buildings is A1 or better.